Obtained: from publisher in exchange for an honest review


Summary: Sasha dreams of becoming a dancer and her big chance is here.  She'll be performing in a talent show with her best friends, Karly and Kevin.  The winner will receive a scholarship to the Summer Academy at the High School for Performing Arts.  When Karly makes quiz bowl her top priority, and Sasha decides Kevin is her crush, things start to fall apart.  Can Sasha pull them back together?

Thoughts: What is a crush?  What does it mean to "like" someone?  How do you know if they "like" you back?  How do you let someone know you "like" them?  What does it mean to be a good friend?These are all questions kids face as they get older and these are the questions, Sasha, the protagonist in this story is asking.  The novel looks at what happens when one of your best friends has a boyfriend, when your friend's priorities change, balancing school and extracurricular activities, and conflicts with parents.  It also touches on being gay.  The author has a wonderful understanding of the emotions and life of a middle school kid.  She writes in a light, fun way about realistic problems, and I love the way she added in some plot twists so the story was not predictable, especially to kids.

Like the first Swirl novel, Pumpkin Spice Secrets, this book has another high achieving main character that is compared to her older sister.  Other than that, the characters are fresh and new.  Both authors are  able to get into a 12 year old's mind and hit on some of the same issues that 11-14 year old's face, but the stories are unique.  This can definitely be a stand alone novel.  If a child you know liked the first Swirl novel, I am sure they'll like the second.   This book is recommended for ages 8-12, but I think 11-13 year old girls would be the most interested. 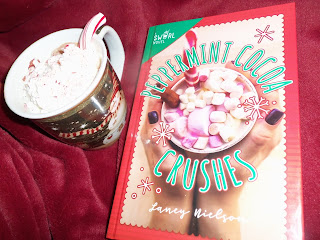 I love cocoa just as much as tea, maybe more. So, I just had to make some peppermint cocoa to go along with this book!  I make cocoa on low heat on top of the stove.  I whisk together: Hershey's Baking Cocoa (2 tablespoons), sugar (1 tablespoon- add more or less depending on how sweet you like it), a dash of salt, and a cup of milk.  I usually use skim milk because that's what's in my refrigerator, but you can use any type of milk, cream, or mixture of these.  If I have whole milk or cream in the house, I definitely use those instead of the skim for a creamier beverage.  When the cocoa is the right temperature for me, I usually add some vanilla extract (1/4 teaspoon) and cinnamon.  (Today, I added just the vanilla.)  You can add any type of  extract to create different flavors- peppermint, almond, orange, raspberry, etc...  I then add whipped cream (marshmallows are another option).  Today I sprinkled crushed candy cane on top of the whipped cream and added the rest of the candy cane to the cocoa to create peppermint cocoa.  Cinnamon sprinkled on top with a cinnamon stick is another option.  You can really get creative with hot cocoa!  Have fun and enjoy!
Posted by A Book and a Cup of Tea at 5:01 AM No comments: 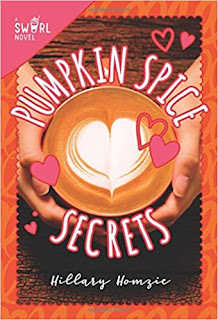 Obtained: from publisher in exchange for an honest review


Summary: Twelve year old Maddie has her first crush and can't wait to tell her best friend, Jana.  It will have to wait until school starts, though, because Jana is away, and Maddie has no way of reaching her.  Before Maddie can tell, Jana announces that she has a new crush on Jacob, Maddie's crush.  Maddie does not want to hurt her friend, so decides that she cannot have a crush on Jacob, but the feelings don't go away.  What will Maddie do?

Thoughts: This book was so much more than I expected.  I don't know if it was the cover, the title, or the book's description, but I had in my mind that this was going to be a soap opera type book with lots of drama.  It wasn't.  It was a very realistic book about friendships, family, and crushes.  It also showed the problems that can arise from keeping secrets.

The author is fantastic at looking at the world through a middle schooler's eyes.  She was right on with this all around- in dialogue, behaviors, dress, relationships, and the way kids think, act, and react.  The characters she created were likeable and believable.  I think most middle school girls could relate to the protagonist in one way or another.  I liked the way the author had Maddie learn and grow in this book.

It was a fun, light book, yet had real life problems and lessons in it including that there are always consequences for actions. There were parents with high expectations, forgetting homework, not studying enough, balancing activities and school, keeping secrets, losing friends, making friends, crushes, all different types of teachers and extracurricular activities- the world of an 11-14 year old.  The book held my interest until the end.  I really was routing for everything to work out for Maddie.

If you're wondering, I would say this is rated G in the romance department- not even a kiss.  I would recommend this for girls 10-13.  I think it would be hard for a 8 or 9 year old to relate to the older characters.  It would make a great holiday gift with pumpkin spice muffin mix for girls who like to bake or like sweet treats.

This is the first book in The Swirl series.  I've also received the second in the series, Peppermint Cocoa Crushes which I will be reading and reviewing soon.  The third is Cinnamon Bun Besties, and the fourth Salted Caramel Dreams.  Each book is written by a different author. 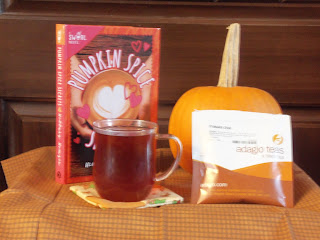 
I purchased the Chai Tea Sampler from Adagio Teas.  Masala tea was one of the four varieties included in the box.  It came in a resealable bag (pictured above).  I have found that some of this company's bags are very easy to open and close, and some are not.  This one was a difficult one, but did still seal to keep the tea fresh.

This chai tea was a blend of Ceylon black tea, cardamom, ginger root, cloves, natural cinnamon flavor, and cinnamon bark.  Adagio tea's website says this tea has a high caffeine content.  When opening the package, there was a wonderful scent of spices that reminded me of fall and winter holidays.  I could see long black tea leaves, whole cloves, round seeds and tiny twigs.

I put four teaspoons of leaves into my teapot and added sixteen ounces of water.  It's a cold winter day and I planned on keeping warm with tea this morning.  I let this steep for seven minutes.  The liquid was a cloudy, orange brown.  The scent was of what I think of as holiday spices- a blend of cloves, cinnamon, ginger, and cardamom.  The taste was peppery and spicy with the cloves standing out a bit. It had no sweetness to it.  This tea just gave me an all over warm feeling which is just what I was looking for.  I tried the second cup with a bit of honey and milk, which toned down the spicy, peppery tastes and took away the all over warming feeling, making for a totally different beverage.  This tea was fantastic both ways. 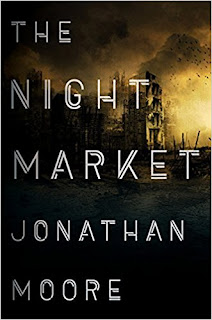 Obtained: from publisher in return for an honest review

Summary: San Francisco Homicide Inspector, Ross Carver, and his partner, Jenner, are called to a crime scene where they find a body that looks like it is being eaten away by something.  FBI agents burst into the room and whisk Carver and Jenner away to decontaminate them.  Whatever the two were given to drink causes them to lose their memories of the past two days.  What is going on?  More importantly, who can they trust?

Thoughts: What a talent this author has for creating setting and atmosphere!  The story took place in San Francisco, California in the "near future".  The author created a dark, weird, somewhat creepy setting that made me feel like I was there.  The story itself was disturbing and parts were gruesome and a bit scary which added to the atmosphere of the book.  Also, throughout the book and right up until the end was the sense of suspicion- not knowing who to trust.  Wow!

The plot itself was clever, unique, and unpredictable.  The story involved conspiracy, mobsters, mystery, murder, memory loss, manipulation, corruption, nanotechnology, drones, and a bit of romance.  The characters were developed, but did not seem to have depth.  It took me a long time to figure out why, but I think it was the dialogue.  The characters spoke to one another, but did not seem to have distinct voices and their personalities were not shown through the dialogue.

I really liked the ending of the story, but not everyone will.  If you are one of those readers that need everything wrapped up at the end, you will not be satisfied with this ending.  Sometimes leaving pieces unanswered and not giving enough details just does not work, but it did here.

This is the third book in a trilogy.  I did not read the first two, The Dark Room or The Poison Artist, but this did not seem to matter as each book can be read as a stand alone and are only "loosely" tied together.

*Please note that I read an advanced reading copy of this book, so changes may be made before the final copy is released on January 16, 2018. 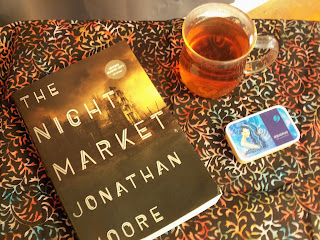 
I received a sample of Aquarius tea with my last Adagio Teas order.  This is part of their Zodiac collection.  Each customer received a small tin of their zodiac sign blend with their order.  The tin reminds me of a small Sucrets container, but the top slides off instead of latching.  At first I thought this would be great for traveling but the container slides apart very easily and would open in a bag.  Nonetheless the container is really cute and these would make great small gifts or stocking stuffers at Christmas time.

I put two teaspoons of leaves in my teapot and poured sixteen ounces of water that had been boiled over the leaves.  I let this steep for three minutes.  The liquid was an orange brown and had a sweet, nutty scent.  The taste was of a light, slightly sweet black tea with a nutty background flavor.  This was a nice blend for anytime of the day.
Posted by A Book and a Cup of Tea at 4:13 AM No comments: