The Girl on the Train


Title: The Girl on the Train


Summary:  Rachel has hit rock bottom.  Her husband divorced her after he had an affair resulting in a pregnant lover.  Rachel had been trying to become pregnant, but was not successful.   Rachel is an alcoholic, and has recently lost her job.  She pretends to go to work each day so her flatmate won't know she is unemployed.  Each day, while looking out the window of the commuter train, she watches a couple who live in her old neighborhood, and makes up stories in her head portraying them as the perfect couple- the life she wished she had with her ex-husband.  She gets obsessed with them, even making up names and life stories for them.  One day she sees something which shows her that they aren't perfect.  The day after, Rachel finds out that the woman is missing.  Would telling the police what she has seen help in finding the missing woman?  She feels drawn to this mystery and to the people connected with it and gets involved way over her head.


Thoughts:  This book went back and forth between the point of view of three different women- Rachel (an alcoholic who has hit rock bottom), Anna (Rachel's ex-husbands wife), and Meghan (the woman Rachel sees everyday from the commuter train).   You learned each woman's story and find out how their lives are intertwined.  Each woman was troubled in some way- alcoholism, anxiety, bad relationships, and issues around children and spouses.  All of the characters in the book were well developed and had depth.  The little criticism that I have is that the characters did not have unique voices, but the way the author laid out the book made this of little significance.
The setting was England, specifically the area around the train line from Ashbury to Euston.  The setting is a real place and the author did a great job of putting a picture in my head of a place that I've never been to.
The plot was a good one, but what made the story suspenseful and a great book was the author's writing style.  It was clear writing, but written in a way to show that each woman saw things differently and had different world views.  Also, it was transparent that people in the story were not telling the truth at times.  It was a good mystery with many red herrings.
This was a psychological thriller that was a page turner.  It was hard to put down.  It may be hard for some people to like these characters.  They were all definitely self-centered and their morals were not high.  To me a story can still be good with unlikable characters, as long as they are well developed and that the things they do stay within their characters.  I really enjoyed this book, particularly the author's writing style.  This is the author's first thriller.  I hope she writes another one! 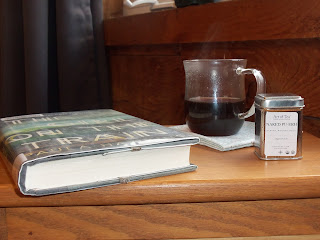 I received a pur-erh tea sampler from Art of Tea as a gift.  Art of Tea is a tea importer and wholesaler based in Los Angeles, California.  They create their own organic tea blends.  The sampler came with four different types of pu-erh teas.  This tea, Naked Pu-erh, is only the second pu-erh tea I have tried.  With a little research, I found that pu-erh tea is grown in the Yunnan province of southern China. Pu-erh teas are fermented, not just oxidized.  This is what gives them their unique flavor. Pu-erh tea is said to have many health benefits- some mentioned are lowering "bad" cholesterol, lowering blood sugar levels, and assisting in weight loss.
The tea came in a small, good quality tin.  It appears that the company uses the same tins for all it's teas and just puts a sticker on the front with the tea's name and a very brief description of the tea.  This one stated "earthy, woodsy, bold".  The leaves were thin, brown, and about a quarter of an inch long.  The scent was earthy, similar to damp leaves.
I put one tablespoon of tea in my tea ball and poured eight ounces of water over it as directed.  I brewed the tea for 3 minutes (3-5 is recommended).  The liquid was a dark red.  The scent was still earthy and made me have a picture of a barnyard in my head.  When I tasted the tea, I have to say I was reminded of spinach.  It was an odd taste, but pleasant.  This tea had body and depth, but very little astringency.
I have found with the two pu-erh's I tried that the taste is not one of my favorites.  I enjoy one cup, but don't want another one.  In reading about pu-erh tea, many people have made the comment that they were trying to stop drinking coffee and replaced their coffee with this type of tea.  After tasting this tea, I see why.  It is almost an in between- not as light as many teas and not as bold or deep as coffee.

Murder in My BackYard

Title: Murder in My Backyard

Summary:  Why would someone murder Alice Perry in her own backyard in Heppleburn, England?  Did it have something to do with the land she just sold and wanted to buy back?  Did she find out information someone didn't want her to know?  Does it have something to do with one of her step son's families or one of the townspeople?  And who committed the murder?  Inspector Ramsay is on the case.

Thoughts:  This is what I think of as a traditional English mystery.  The book started off at a slow pace, doing a good job of describing the setting and introducing the characters before the murder took place.  As the book went along and clues were discovered, the pace picked up more and more until the mystery was solved.  There were numerous suspects and possible motives. There were also countless feasible red herrings thrown in, making this a clever whodunit story.
The writing style was clear and straight forward.  The well developed characters were unconventional and interesting.  The protagonist, Inspector Ramsay, was likable and has his own series of which this is the second book.  The village where the story took place was charming.
I would recommend this book for a traditional mystery lover looking for a quick, light whodunit story. 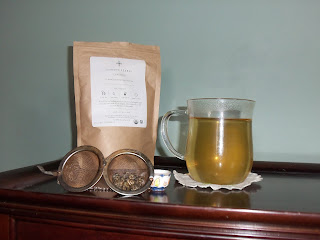 Jasmine Pearls is a tea handcrafted by Art of Tea.  It is a green tea scented with jasmine.  It comes in a brown resealable bag.  When you open the bag, there is an enticing jasmine scent.  The leaves are hand rolled into little brown and white balls.
I poured eight ounces of water over my tea ball which held one teaspoon of "pearls".  I steeped the tea for 3 minutes (3-5 was recommended).  If you steep the tea in a clear pot or cup, you can watch the "pearls" expand into leaves.
The liquid was a clear pale yellow.  There was a faint aroma of jasmine to the liquid.   The scent was calming to me.  When tasting the tea, there was a very slight jasmine taste to this light, smooth tea.  It had a minute astringent aftertaste that was pleasant.
This tea was delicious.  It is one of my favorites, definitely my favorite green tea.  It is delicate, yet has flavor.  The best part is the aroma reminiscent of spring.  It gives you a relaxed feeling, yet has medium caffeine content.  I am betting this is refreshing iced as well.

Summary: Ava Orlova, a teenager from Russia, is rescued by Black Widow from being experimented on by Ivan Samodorov when she is a young girl.  Ava is placed under S.H.E.I.L.D. "protection" in the United States, but escapes.  Black Widow thought that Ivan was dead, but when children all over Eastern Europe begin to disappear, and messages are intercepted, she believes that he is alive and that Ava is in danger.  Black Widow finds Ava and joins forces with her.  Their mission, with the help of Alex Manor, is to save the world and themselves from their former "teacher" Ivan Samodorov.

Thoughts:  I borrowed this audio book from the library because I had planned on listening to it on a long car ride with my husband and two sons.  They are big superhero fans.  We didn't go on our trip, but the CD's were in the car, so I began listening to them while driving.
This was definitely a young adult book.  It was really the story of Ava Orlova and Alex Manor- two teenagers in a teen romance trying to save the world with Black Widow.  Black Widow was a main character, but the book was more about the teens than her.  The characters were well developed.  I particularly enjoyed some of Black Widow's "lines".  Iron Man made an appearance and I think the Marvel characters stayed true to their personalities.
I described what Black Widow says as "lines" because this really felt like a movie.  There was lots of action- fighting, running, hiding, explosions, gunfire, etc..  The plot was a typical super hero versus villain fight to save or take over the world found in movies and comic books.
The narrator was absolutely fantastic.  She had a distinct voice for each character that fit their personality and I believe actually added to the character.  There was no question of who was talking.  Her voice was clear and she read at just the right pace.  She read with expression, but didn't overdue it.  The way she read the book was what kept me listening.  Another plus was that there were tracks every three minutes, so it was easy to find my place if I moved the disc from one cd player to another.
I would recommend this book to super hero fans in their teens.  The book is with no question for teens and about teens.  It is not primarily about Black Widow.  Also, I would definitely recommend the audio version of the book.  I don't think I would have liked the book as much if I had read it myself.  The narrator is a fantastic reader and actress. 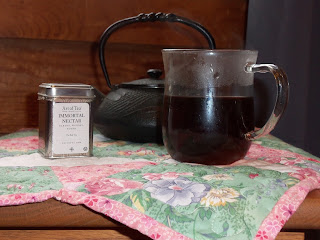 Immortal Nectar is a Pu-erh tea from the Art of Tea.  This was my first time trying a Pu-erh tea.  This type of tea is fermented and then aged.  It is from China.  It is supposed to lower LDL "bad" cholesterol and increase HDL "good" cholesterol.
My tea was in a small tin out of the pu-erh tea sampler.  It opened and closed easily, the seal is good, and I think it will protect the leaves.  The leaves were thin and brown and of all different lengths.  They had an earthy scent reminiscent of freshly cut hay.
I put one tablespoon of leaves into my teapot and poured eight ounces of boiling water over them.  I let the leaves steep for three minutes (3-5 minutes was recommended).
The liquid was a very dark brown and continued to have the earthy scent reminiscent of freshly cut hay, but the scent was stronger.  The taste was a rich earthy one that was very pleasant.  There was a slight astringent aftertaste.  I was surprised by this because I had read that pu-erh teas do not have this astringent taste.
The Art of Tea website stated that these leaves can be steeped multiple times.  I steeped mine a second time and the tea tasted the same to me.  I recommend this tea for those that like an earthy tasting tea.  It also would be good for those that drink a lot of tea in one day since you can keep reusing the leaves.