The Fifth to Die 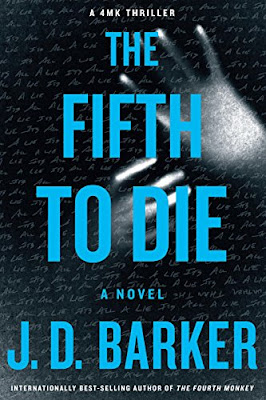 Thoughts: This second book in the 4MK series is due to be released on July 10, 2018.  There are a few days before it is available to start by reading the first in the series, The Fourth Monkey.  I highly encourage reading this series in order.  Although I did read this second book without reading the first, I now want to go back and start from the beginning.  It was not confusing and made sense, but I wanted the background information as I was reading and still wanted it after finishing the book.

This was a fast paced, gripping, thriller / mystery with similarities to the murder mysteries written by James Patterson and Thomas Harris, but not a copy of either.  The writing style was similar to some of James Patterson's in the way Barker moved the story and created suspense by telling his tale by jumping from character to character and showing it from different perspectives.  It was similar to Thomas Harris' writing in that the villains in this story were horrific, yet intelligent like Thomas Harris', and the writing was quite graphic.

This was a long book, over 500 pages, but a quick read.  It was one of those books where I couldn't wait to get back to reading to find out what was going to happen next.  The characters were somewhat developed.  Again, I probably would have felt I knew them better if I had started at the beginning of the series.  There was so much going on.  I mean a lot.  I love complicated stories and plots.  The descriptions did not weigh the story down, but were detailed enough that I could picture what was happening in my mind.  I felt the suspense and horror and found myself routing for the good guys.  There are twists and turns and the ending leaves the reader shocked and hanging on for the third in this series.

If you like serial killer murder mysteries that aren't cozy, but scary, chilling, horrific, and creepy, this book is a must read.  Just be aware that you will feel a need to read the third in the series, but will have to wait for it to be written! 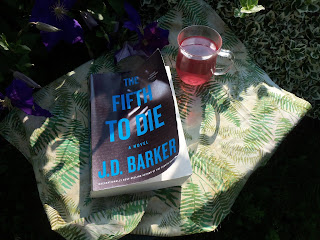 I purchased the Davids Top 12 sampler.  Today I tried Forever Nuts which is a caffeine free herbal blend.  The ingredients are apple, almond, cinnamon, beetroot and artificial flavouring.  The tea was made up of large chunks of fruit and nuts.  It had a sweet, nutty scent.  I poured sixteen ounces of water that was near boiling over two and a half teaspoons of leaves.  I let this steep for four minutes.  The liquid was a beautiful, bright pink which I loved.  The scent reminded me of oatmeal cookies.  The taste was of sweet almond and cinnamon with apple in the background.  It was very smooth and sweet, and tasted like a watered down oatmeal cookie.  This tea wasn't for me.  It just seemed to be missing something.  It was like liquid dessert more than tea.  It was almost identical to Almond Cookie Tea from Joy's Teaspoon.  If you are looking for a sweet dessert tea, and like cinnamon, almonds, and apple, this is for you!
Posted by A Book and a Cup of Tea at 12:38 PM